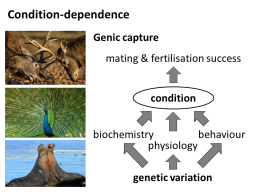 Sexual selection is often considered to work in opposition to natural selection due to the cost of maintaining sexually-selected signals. However, genic capture theory states that mating success, especially in the face of competition, is ultimately determined by condition, and therefore shaped by a large number of naturally selected genes.

Sexual selection may therefore augment natural selection by improving the purging of deleterious mutations and the fixation of beneficial ones, creating population-level fitness benefits.

I test this idea using experimentally evolved populations of

the promiscuous flour beetle, Tribolium castaneum, which differ only in their contrasting opportunities for male-male competition and female choice across 50-100 generations of selection.

Association for the Study of Animal Behaviour Winter 2017 – Sexual selection: Do we still need to test the alternatives?
Talk title: Does sexual selection improve population fitness?

“If a flour beetle egg was the size of a rugby ball how long would a sperm cell be?”

Read more about my experience and reasons for getting involved on the UEA BIO Equality and Diversity blog: Soapbox Science: shouting for women in STEMM

Take a look at the UEA CEEC science news and events blog for a simple summary of my paper about sperm competition and sperm length evolution ‘Sperm size matters’. 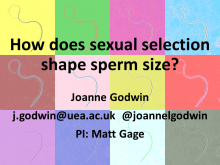