Last month Kris completed his PhD ‘impacts of heatwave conditions and temperature variation on reproduction in the insect model Tribolium castaneum’. It was a great opportunity to critically discuss the work within. In addition to the acknowledgements (photos below), thanks to the external examiner Prof. Klaus Fischer, the internal examiner Dr. Richard Davies, the chair Dr. Gabriella Keleman and everyone who contributed to the celebrations.

Evidence shows that natural populations are shifting their ranges and becoming locally extinct at warm margins because of climate change. However, the proximate mechanisms behind these responses are poorly understood. This PhD thesis explores one potential driver within insect systems: the impact of heatwave conditions and thermal variation on reproduction. Heatwaves are expected to become more frequent and extreme in the future under climate change, and male-specific sensitivity of reproduction to heat-stress is known in endotherms. However, there is scant information about this phenomenon in ectotherms, despite their abundance and more direct vulnerability to thermal change. Using the red flour beetle model (Tribolium castaneum), males and females were exposed to sub-lethal 5-day heatwaves, where the temperature was 5 to 7°C above the optimum for population productivity. Following exposure to a heatwave, the reproductive fitness of males, and reproductive fitness of sperm inside female storage, were halved. Conversely, female reproduction was unaffected. Within males, heatwave conditions reduced testes volumes, lowered sperm counts, limited the distribution of inseminated sperm in the female tract, decreased sperm viability, and reduced female egg production and hatching success. Furthermore, offspring suffered transgenerational effects if their fathers or fertilising sperm were exposed to heatwaves: adult longevity and the reproductive performance of sons were reduced. Reproductive damage from heatwaves was exacerbated if males were exposed at immature life-stages, or to successive heatwave events, with a second heatwave rendering most males completely sterile. However, recovery was possible after ~20 days following a heatwave. Using experimental evolution of replicate lines under thermal regimes that were 8°C warmer than the ancestral 30°C for 25 generations, it was clear that adaptation to thermal damage was possible, with males from warmer selection regimes suffering a less significant fertility reduction after heatwaves. These findings demonstrate the sensitivity of male reproduction to heatwave conditions, indicate the potential for recovery and adaptation, and provide one proximate explanation for population declines under climate change. 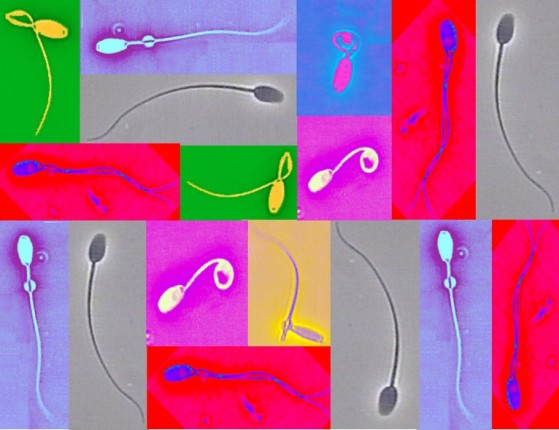